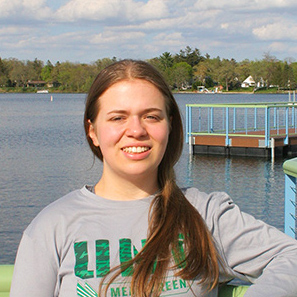 Stephanie Plautz, winner of our 2018 OFA Fine Arts Scholarship, began her music studies on the baritone, but quickly learned the trombone and has become a versatile and accomplished player on both instruments. Stephanie has been a member of the Milwaukee Youth Symphony Orchestra. After two years playing euphonium in the orchestra Junior Wind Ensemble, she advanced to the upper level Metropolitan and Senior Symphony orchestras on trombone.

At school Stephanie earned a euphonium position in the prestigious Oconomowoc High School Wind Ensemble as an incoming Freshman – an honor given only to the most high- achieving students. She has extensively studied standard and advanced orchestral wind ensemble repertoire on both instruments. She performs in the Milwaukee Youth Symphony Orchestra, the Oconomowoc High School Wind Symphony, the OHS Brass Ensemble, the OHS Brass Sextet, the OHS Pit Band and the OHS Orchestra.

Most exciting is that Stephanie has become an accomplished self-taught composer.  For three consecutive years she has been selected as a participant in the Milwaukee Youth Symphony Orchestra’s John Downey Creation Project. This involves the public premier of new works by select young Wisconsin composers. Stephanie premiered an original orchestral piece during the 2015-2016 season titled “Love Like Lavender,”  a brass ensemble piece in 2016-2017 titled “Hope,” and a woodwind quintet in Spring 2017 titled “Multiple Choices”. Stephanie was awarded 3rd place from the Wisconsin School Music Association (WSMA) in 2016 for her piece “Love Like Lavender.” Stephanie has competed in WSMA competitions since the 6th grade. In State WSMA competitions she received a score of “1” on the euphonium in 2014, 2015, 2016,  2017 and also a “!” in 2016 for solo trombone.

In addition to distinctions she has received for her composing work, Stephanie has been honored by the National Band Association All-State Band, the UWM Music Festival, Carroll College Concert Invite, and UW-Stevens Point. She plans to major in Music Composition at the University of North Texas in the fall.