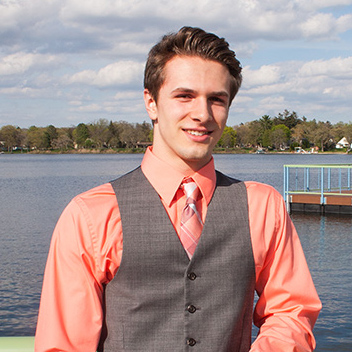 Matthew Kellen’s, journey to learn the trumpet began in the 5th grade. Matthew explained “that one of his first goals was to produce a pure, resonant, and open sound.” He said “I spent rigorous hours in my room experimenting with different embouchures, desperate to develop a sound that was pleasing to the ear. I wasn’t seeing immediate results, so I quickly became discouraged.” One day Matthew became so frustrated that he thrust his mouthpiece into his trumpet so hard that he had to ask his father to bring the toolbox and fetch it out. Soon after that experience, Matthew said he realized “that achieving success on the trumpet was going to require patience, dedication, and deliberate practice…” Matthew continues to challenge himself to better his music and his character. The Oconomowoc Festival of the Arts would like to reward that effort with one of our Fine Arts Scholarships.

Matthew is the 2018 winner of the Waukesha Area Symphonic Band Concerto, the 2018 Oconomowoc High School Senior Concerto, and received a 1st at District competition and went on to State competition in trumpet.