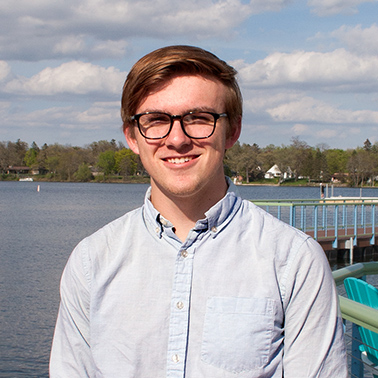 Charles (Charlie) Palm, recipient of our 2018 John Rawlins Memorial Scholarship Picture is a recent high school graduate who plays at least eleven musical instruments and is now a professional musician, gigging at venues including the Marcus Amphitheater, Bradley Center, and Turner Hall, with names such as Neil Davis and the Tommy Dorsey Band.  He has composed many original musical pieces that have been performed by external groups and school ensembles of various instrumentations. Charlie is also founding member and performer on guitar and vocals in a funk band called Grilled Cheese. He is arranger for the band, transcribing chords, and arranging the trombone, trumpet, sax, and bass parts. “I have grown up around two very musical parents that sat me down on a piano bench at the age of 4 where I started to teach myself,” Charlie said. “I did eventually get lessons on the piano, but I soon realized that intuition and discovery were the only ways I wanted to learn.” Charlie taught himself to play the piano, guitar, bass, ukulele, trumpet, baritone, trombone, tuba, saxophone, drum set, and percussion, and he performs his gigs using 5 of these instruments.

When not gigging with his band or other local groups, Charlie has played with the Oconomowoc High School Varsity Band, Varsity Jazz Band, and Pit Orchestra, the Milwaukee Symphony Youth Orchestra, and the University of Milwaukee Youth Jazz Ensemble. Since he was a freshman, Charlie has devoted hundreds of hours playing music at the United Church of Christ and has volunteered at other church activities such as the craft fests and rummages sales.